I’ve told all my Gene Simmons stories on this site. I think. I had some good ones. Well, time to tackle another KISS member -- guitarist Ace Frehley.

I went to get his signature on my KISS items signed that were signed by Gene. And since KISS was my friends favorite band, I brought him with me to the soundcheck before a concert at House of Blues in San Diego. Well, after waiting an hour, I went to go put change in the parking meter that was about to expire. That’s when he showed up, saying “Two items a person.” My friend got the Ace Frehley solo album signed, and a KISS CD. I got nothing. Now, I did meet a guy years later, who was renting a mansion to Frehley. Once going to his house, he even pointed out his home to me. I’ve just never had it in me to go up to someone’s house to ask for an autograph. Not to mention the fact my new friend wouldn’t have been happy.

He did a concert at a small club a month ago, but...I’m just not a big enough KISS fan to worry about attempting it at that point.

Now, I did see a story my friend posted on Facebook about Frehley, and it cracked me up. It’s a way you could get his autograph, and a little something more special. He’ll be the best man at your wedding. If you’re willing to shell out $6,000. He’s calling it the “Ace Frehley Wedding Experience,” and it takes place in late October. He’ll either be your best man, or he’ll give the bride away (I would just want to make sure that’s all he did with the bride). This would all take place at the KISS “Love it Loud” wedding chapel. Now, for 6k, it’s not just Ace walking the bride down the aisle. They’ll provide a professional photographer and photo session, complete with Ace’s actual guitar (although it doesn’t say he’ll be in the photos, which is suspect). You’ll also get a 45rpm colored vinyl record with a certificate with Ace as witness, which I’m assuming means he signs it. You’ll also get a wedding cake, but no word on if it has a couple on top, standing alongside the long-haired guitar god.

Frehley has a new solo album coming out October 19th, so...hopefully fans will be able to order signed copies.

For those wanting to tie the knot, or renew their vows, email KISS@MonsterMiniGolf.com for details.

For my money in Vegas, I’m going with an Elvis impersonator.

That is freaking hilarious

That has got to be the most inventive, if not the most hard up way for a celeb to earn a few extra bucks

I remember Howard Stern giving Gene Simmons crap when he was trying to sell the Kiss Kaskets, for when you die (they were around $7,000 or something outrageous).

SIDE NOTE: My friend, who got Ace's autograph when I went to put money in the meter, told me we actually waited for hours, and that he only signed one per person, so...he never got his KISS album signed, just the solo record.

Love to read your articles Josh. My wife and I got married at the Monte Carlo 20 years ago in June. She didn’t want to but I talked her into going back for our anniversary. Of course we had to play Kiss mini golf with the kids. It might not fit in anywhere else, but it fits in perfectly in Vegas. I asked her if she would like to renew our vows there while we were there. No. Then when I saw this and said we could go back and Ace could walk her down the isle! She still said no?? She’s not the woman I married. 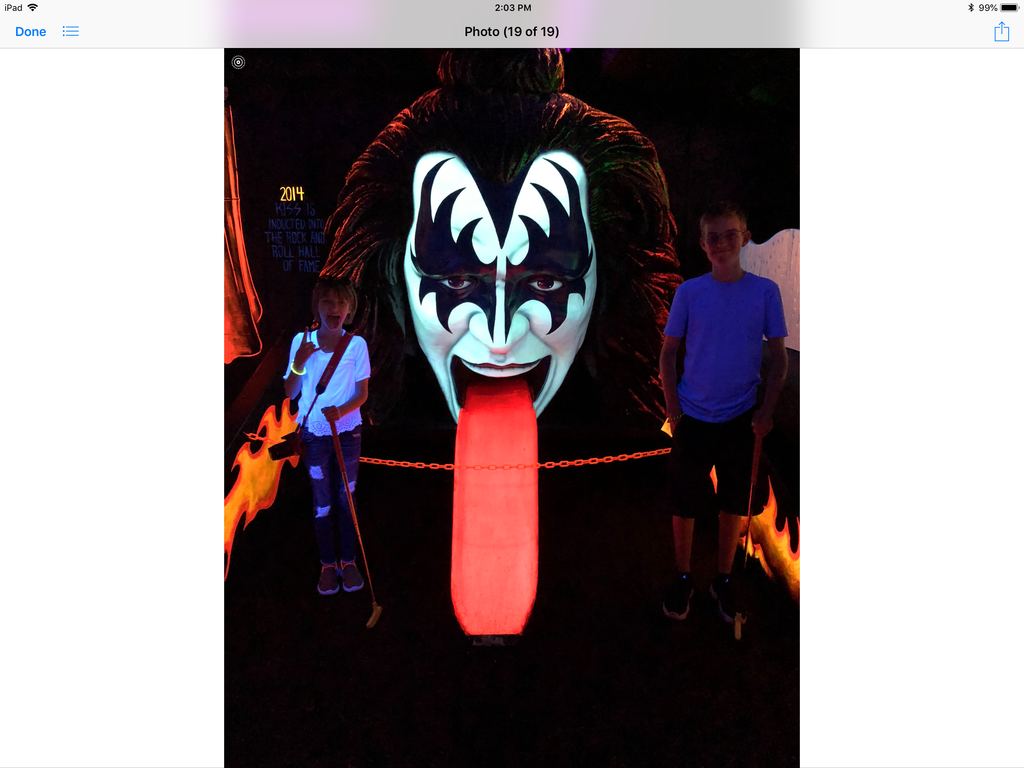 Barry...that gave me the biggest laugh of the day. Thank you! And...congrats!   (I'm hoping on your wedding night, Gene Simmons tongue made an appearance)

Side note: Sorry to Steve Cyrkin if that last line was a bit risque.