A Rare Babe Ruth Worth Millions...or is it?

There’s a story that came out the other day that confuses me. A baseball card collector named Dale Ball in Fresno, California, claims he’s holding a baseball card that might be worth millions. If proven to be real, it will put the Honus Wagner card to shame. And he only paid $2 for it, which didn’t surprise me. At first. I figured, he probably saw it at a garage sale or something. What blew me away though, is that he purchased it at Action Sports and Coin, in Sparks Nevada. He saw the price listed as “800” and asked if that was $800 or $8.00. When told it was eight bucks, and with the pawn shop having an 80% off sale, he got it for $2. The shop owner said it’s probably a fake, since he couldn’t find it anywhere online or in any magazines. The man that purchased it thinks it’s a 1921 Babe Ruth Shotwell E-121 Model, of which there are only two cards known to exist. It’s just so odd that a shop like that would, upon not finding it on any search, would sell it so cheap. I mean, it’s one thing if somebody came in and offered you a few hundred bucks and you couldn’t find it anywhere. Then you could figure it’s a reprint of some kind. But...it’s better to store something and hope you can figure it out someday. It’s not like a card takes up much space in your shop, and what does $2 do for ya? I spent two bucks on a Big Gulp and beef jerky at 7-11 this afternoon. But I digest.

Ball said he spent 3 days researching, before he found the logo on the back of it from the “Shotwell” company. He called the Baseball Hall of Fame and told them about the card. They were rather interested in it.

It’s in the process of being authenticated now, to which my wife says, “Why is this a story now if it’s not even proven to be real? The news is covering this as if he won a million bucks.”

Ball said if the card is real he won’t sell it for less than $2 million because “I found the Mona Lisa of baseball cards.”

I’m guessing if you put $750,000 in front of him, he’d take it. He’s hoping the money will help his parents retire, and that when he originally bought it, it was just for his sons collection. 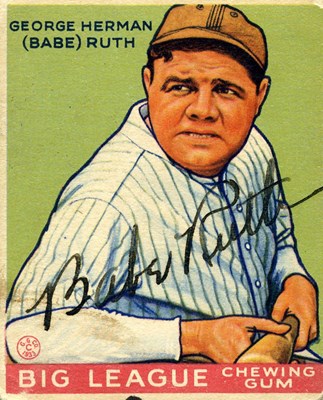 Now, the part that shows Ball is a better person than I -- he said when he does get the millions for it, he’s going to share the profits with the pawn shop in Sparks that he bought it from. Uh, why? If a pawn shop buys some Van Gogh painting from an old lady that is selling belongs from her husband that died, do they say, “Uh, you might be able to get millions for this if you auction it off instead of selling it to a pawn shop.”

If the card is a replica, and it’s determined to be worth 75 cents...would the pawn shop give him back his two dollars?

What is confusing? I don't understand. I am the guy making faces and waving my arms behind the "dealer/expert" selling a poor bit of "estate furniture" - so the newlywed couple sees me and I can then quietly say in another room - "check the back legs" and so on. Years ago, when an old lady or the like would bring to me her husbands coins, or I was asked to evaluate a collection of someone no longer around, I would be truthful and offer to help sell it were there something special beyond the endless post 1963 mint & proof sets etc. - for a cut we agreed on. It felt right and they'd come back to me, if possible. Now, to me that is different scenario than spotting a raw Pr67 Mercury 10C in a coin dealers case marked Pr65.

PS - Yes, I would return the $2 if I ran that store. Look at what he has done - I even know their name and location now. I'd frame it and put it on the wall with the title "You never know".

Reminds me of the movie "Buffalo Nickel" -- a David Mamet story where Denis Franz runs a pawn shop and thinks he sold a rare buffalo head nickle to a customer for a few hundred bucks and it might be worth millions. Dustin Hoffman plays the creepy customer that might help him steal it back.

Millions! That sound like a lot more than a three legged Buff!

I don't know how anything can be worth millions if it really has no documented history. The Wagner card got to where it is today based on a combination of age, rarity and being a bonafide famous piece of Americana. The Ruth card, whatever it really is, represents none of that.

I can make a Ruth card that is one of a kind online with photoshop and a quick order to Uprinting. Odds are it won't be worth much.

Side note: Perhaps it's just the photo lighting, but that thing doesn't look very old at all.

Agreed, I noted the same things.

Of course. I was speaking to the apparent lack of cache or notoriety the T206 possesses.

That's a great point, Eric. I didn't consider that. I figured...even if it was some company that made it in 1926...that if it's the only one known to exist, it would be worth millions. But I can see how that's not the case, now that I think about it.

that card has been forged since the beginning of time and I'm only a novice card collector.