One of my autograph buddies always makes the two-plus hour drive to L.A. for autographs. Sometimes I hit him up to get me a signature, if it’s a book signing or something like that. I remember once he called me at a book signing and said, “For $50, they have this book that shows every Playboy centerfold, starting with the first issue.”

Playboy founder Hugh Hefner was signing them, and I said “Nah. I’m not that into him, but thanks.”

After we hung up the phone, I realized how many times I’ve interviewed the cast of a movie, or an actress...only to find out she was a one time Playboy centerfold. I thought it might be something I could occasionally get signed [side note: is anybody buying this explanation?].

I called him back and told him to buy me one.

Now, I debated on spending $50 for a signature of Hefner. Imagine my surprise when I heard about an auction Julien’s had with many Hefner items. The typewriter he used in college made the most. It went for $162,500. That makes absolutely no sense to me. This wasn’t Hemingway’s typewriter. And, I think I’d wear gloves when handling it.

His complete set of Playboy magazines went for $76,800.

Now, just as my favorite item in an Elvis auction 20 years ago, was a bottle of pills with his name and info typed on it, that sold for $100. At the time, I thought that would be like owning the toilet seat he croaked on. But I digest.

The item in this auction that had that bizarre type of appeal to me….a gold and onyx ring with a hidden compartment, that Hefner keep a Viagra pill. That went for $22,400 (Viagra not included). 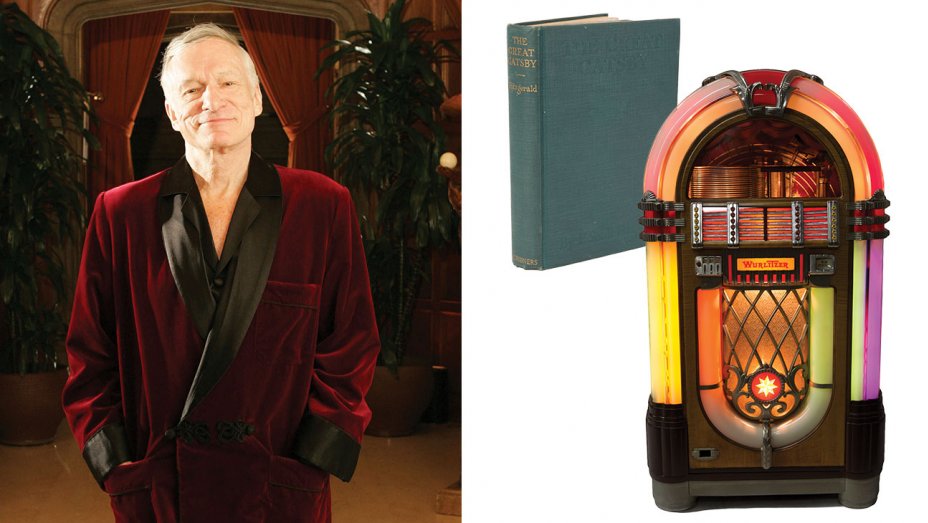 And as someone that loves old radios, phonographs, and jukeboxes...I loved the 1946 Wurlitzer jukebox, with the 78 rpm albums (including Artie Shaw, Lena Horne, and Johnny Mercer).

He had a first edition “The Great Gatsby” that fetched a pretty penny.

The auction took place over the weekend, with the proceeds benefiting the Hugh M. Hefner Foundation, which defends civil rights and civil liberties.

I so tried to think of a joke about the right to bear arms and bare your body...but I couldn’t think of how to word it. If you can think of a way to do the joke, please insert it here.

How do you ignore Members and continue to write stories? I no longer want to be a Member here, but I will miss your Stories. Take Care, Josh.

I'm not sure what ya mean. Who is ignoring anyone? Or...do you mean YOU want to ignore certain members here?

I purchased the Buccellati Borgia 246 piece silverware set from this auction.  A bit more than I wanted to spend but still happy to have it for $19,000

Oh, I would have loved to have had the first edition of "The Great Gatsby." It's nice to know that Hugh did have an interest in academics.