I believe my last blog was in August and there were more hits than misses this fall.

Two Hall of Famers- Steve Cropper and Dave Mason were touring together and made a stop at a local venue.  Great show and Cropper has great stories.  Both did the merch table after the show.  Mason was pleading with patrons not to ask Steve questions because he wanted to go back to the hotel. (Steve loves to tell stories- he told them anyway!) 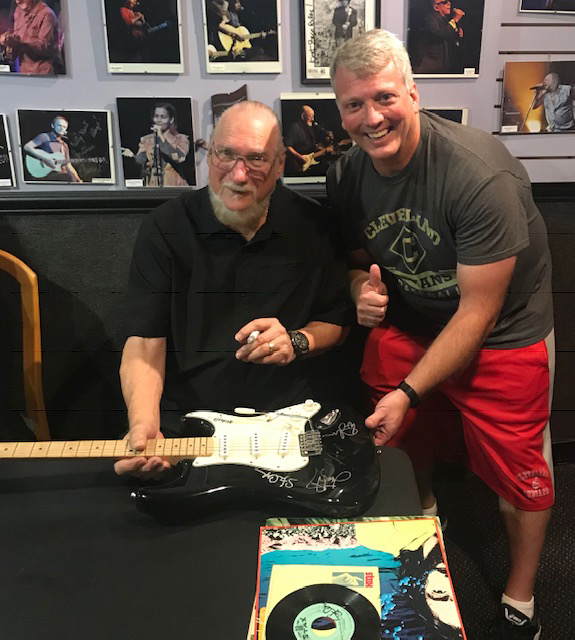 (Look, he's signing a guitar! He and Dave didn't mind at all!)

I made the trek down to Columbus to see if I could get Def Leppard to complete my custom drum head.  All the guys came out and signed (Vivian only signed Dio items) but Phil was the only one to take pics.  I ended up completing my drum head, Pyromania (minus Steve) and "Pour Some Sugar On Me" 45. Tom Bailey from the Thompson Twins sounded fantastic and came out and did the merch table after the show.  Got him on an album and my Live Aid poster. I got a friend to add Jim Kerr and Charlie Burchill from Simple Minds to the poster for me. 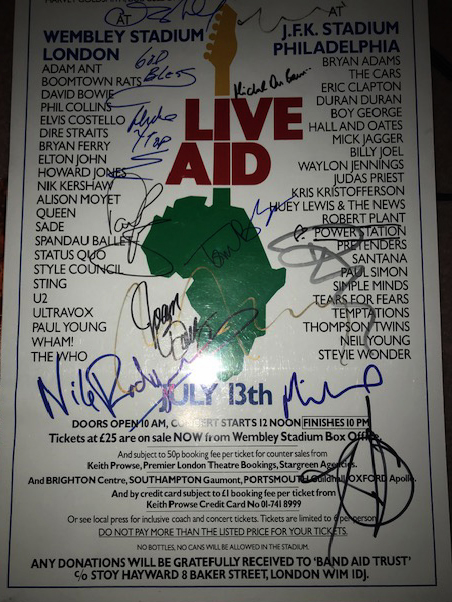 John Oates played a free show at the Rock Hall and came down to the fans afterwards and signed for everyone there.  Super nice guy.

Ringo Starr and his All Starr band came to town.  I knew better than to ask Ringo- there were five of us there and one fan had Abby Road signed by Paul and George.  I told her, he's not going to sign.  She said, I have to try.  I agreed.  Ringo came by saying Peace and love.  Looked at her and said.  "You know I'm not going to sign that!"  and proceeded into the hotel.  I did end up getting the guy I wanted most- Gregg Rolie, on a Journey album and my Woodstock poster.  Not a lot of Woodstock performers left!  I also happened to get David Sanborn on my Woodstock poster after his performance.  Super nice guy who actually invited fans into the green room after the show!

I made another trip, this time to Pittsburgh to meet the great Dan Akyroyd who was doing a bottle signing.  My buddy and I were about 30 people back and Dan actually came an hour early and started signing right away.  Besides the bottle, I got an additional 5 items done.  Very happy to have met him, and well worth the trip. 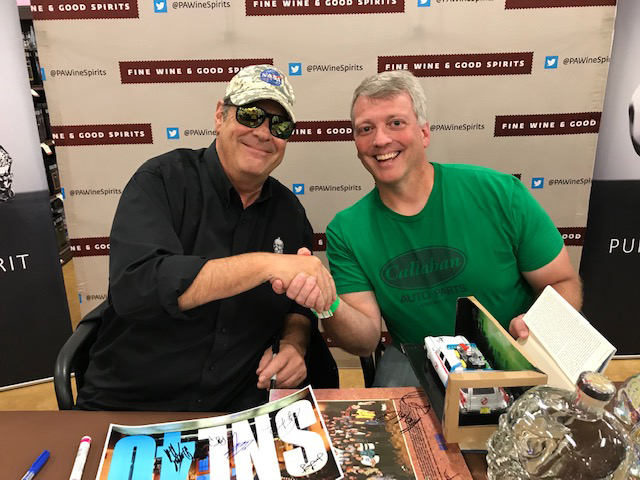 Speaking of Woodstock, Joan Baez made a stop on her final tour.  My friend went up early to get her to sign for him.  She was out feeding birds, they started to chat for 20 minutes and she ended up giving him two tickets and backstage passes for after the show! I didn't have time to grab an album, but I did put my Live Aid poster and HOF poster in the car and she graciously signed both.  There are still cool people who take care of their fans in this world.

Sammy Hagar's The Circle made a return appearance to Cleveland.  On the way in to the venue, Sammy waved but didn't stop.  However, Michael Anthony, Jason Bonham and Vic Johnson all stopped and signed for the fans.  Never met those guys before and both were very nice.  I got Michael on two items- even though I had more as Van Halen is my favorite band. The difficult Boz Scaggs was awesome in concert.  There was a cold, light rain after the show but I figured I had to try.  About 6 fans waited after the show and he waved to us as he went to the bus.  A minute later, his manager came over and said Boz couldn't come over to sign, but he would take things on the bus.  Score an album and drum head for me! 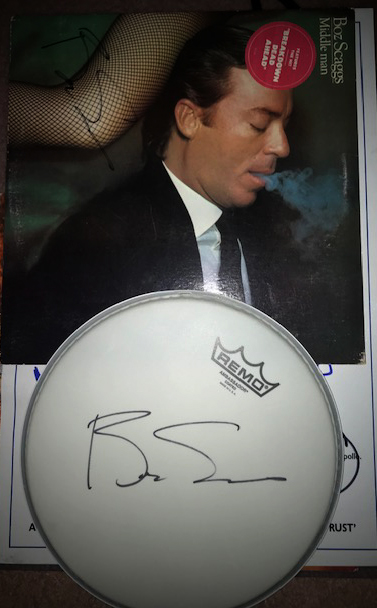 My favorite WW II series, Band of Brothers, had a small reunion of about 9 guys in Cleveland for a charity event.  I ended up getting six of the guys on my poster.  Not too bad. Actress Mira Sorvino gave an eye opening speech about Human Trafficking at a Kent State branch campus.  After the speech, she met fans, took pictures and signed a strict one item each.  We don't get Academy Award winning actresses around here too often. Finally, Little Steven came back for his Teacher Solidarity Tour.  He gave a free workshop to any teacher who wanted to attend and then gave them free tickets to the show!  As a teacher, I loved this!  Great show, and afterwards, like last year, Steven signed for fans who were waiting for him after the show.  I got him on an album and a Soprano's poster.

On my radar to finish out the year are Brian Setzer, Lindsey Buckingham, 2 guys from Canned Heat, Joe Perry (if he's well enough), Dennis DeYoung and Joan Jett.

Lots of great scores! Shame some people have lost interest in their fans. Never understood why multi millionaires where so afraid to sign guitars worrying they might be worth a couple of bucks compared to what they have.

Great stuff as usual. I always look forward to your posts and seeing who you get.

That 1984 album looks sweet. Even if it's never completed. As a huge VH fan, I love that item.

Springsteen is my wifes favorite, and I got her tickets to Little Steven at House of Blues next month. Hopefully he'll sign for us!

My friend got me Boz. He said he'd only sign one item, but my friend said "This isn't for me, but my friend Josh." He sighed, and then signed. Yessss!!!! Apparently, he's a tough get.

Now, I've said it before and I'll say it again -- Ringo is a tool. Just sign autographs. Personalize them, make them sloppy so they can't resell, whatever. But...it makes him a jerk, in my book. I'm so glad Howard Stern called him on this during an interview once.

Anyway, get stories. Thanks for sharing them.