As a movie critic, I’m often lucky enough to meet or interview celebrities I’m a fan of. Sometimes that happens in unexpected ways. For example, a few days ago I was driving into a radio station to do my weekly movie reviews. On another radio station (which is in the same building), I happened to hear a comedian/actor that’s one of my favorites -- JB Smoove. I was a fan even before he started creating such a ruckus with Larry David on “Curb Your Enthusiasm.”

I was both happy and bummed by hearing him on the radio. I was thrilled that he was as funny as he always is. I was bummed that I didn’t know he’d be in because...I would’ve brought his book in for him to autograph. Last year on my birthday, among the many gifts my wife got me, was the hysterical “The Book of Leon.” 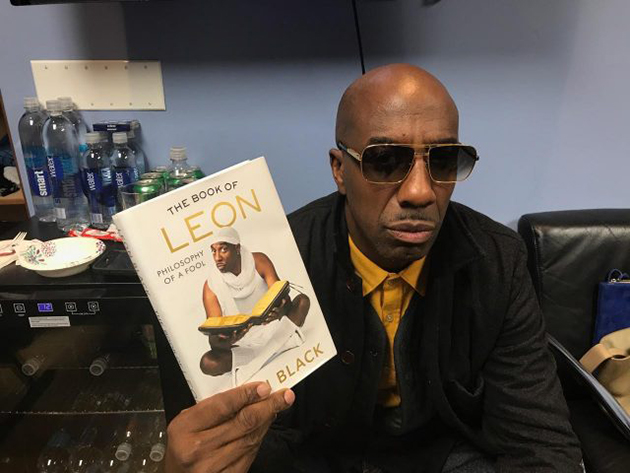 I pulled into the radio station parking lot just as he was leaving. He was with a manager and texting someone. I tried not to skid the car slamming on the brakes, but quickly parked, and jogged over to him. I said, “Hey JB...I’m a huge fan.”

He thanked me and I said (and this is a true story), “I’d love a picture with you but the problem is...I’ve never taken a selfie with this phone. In fact, I’ve never taken any photos with it. I don’t even know how to. It’s an old phone.”

He smiled and said, “Get that phone over here, let’s take a look at it.”

As he noticed it was a slide-out, old school cell, he started laughing. He then spent a few minutes making fun of the phone, and...it was one of the great comedic moments of my life. I used to hear people say that the best thing that could happen in comedy is to have Don Rickles insult you. Well, this was the equivalent for me. JB Smoove riffing on my old-ass phone.

He got it to work, and his manager took the photo. As he was walking away he said, “Come to the show tomorrow night.” 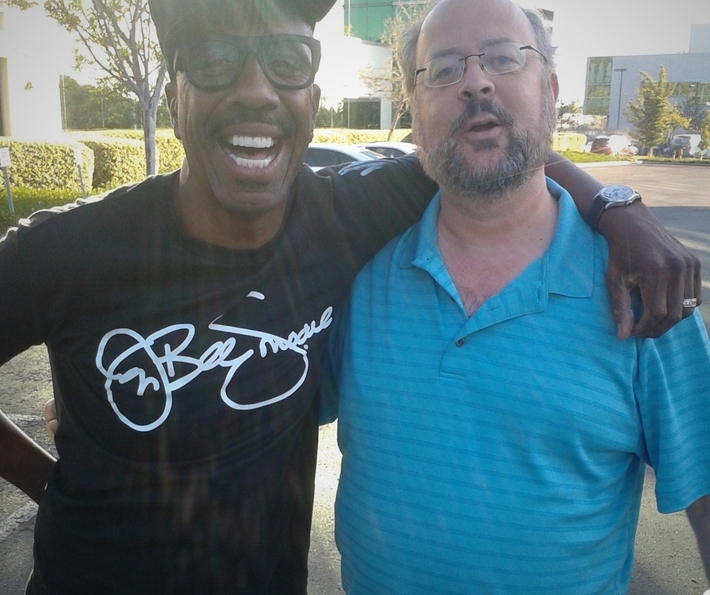 My wife and I had already talked about going, but I wasn’t so sure. I remember 10 years ago, being in Las Vegas and getting front row seats to see Wanda Sykes. I loved her on all her talk show appearances, and...it ended up being one of the worst shows I’ve ever seen. In an entire hour, I literally only laughed twice. And she kept looking at me (perhaps because I was one of the few white guys in the crowd, and sitting directly in front of her), so to be polite, I had to keep pretending to laugh and smile. It was miserable, and I didn’t want to experience that again.

The wife (as I affectionately refer to her) said, “We have to go! You love him so much! I didn’t even know he was in town. I signed up on his website a few years ago, just so I’d get notified when he came to town. How did I not get notified of this?!”

Of course, this time I was going to get his autograph. Yet I didn’t want to carry around his book during the show, so I just took the cover of it. It’s easier to just slip that in the wife’s purse.

We bought our tickets at the window, and we waited by the side door. After about 15 minutes, his manager walked outside. He was a short bald dude, and I told my wife, “He was kind of mean the other day. When I was getting my photo and me and JB were talking, he said a few times, “Come on, let’s go.”

Being the reasonable person she always is, the wife explained, “They have to do that. Otherwise, fans just keep talking or wanting more photos and they can never leave.”

“I get that. Trust me, I do. But I was the only person in the parking lot!”

She continued, “Yeah, but...they can always be the bad guy, that way the star doesn’t have to be the one to cut you off. The star can say ‘Hey man, I gotta go’ while pointing to the handler that’s dragging them away.”

We stood there for an hour, as we watched homeless people walking by downtown San Diego, and a couple yelling at the ticket window because their tickets weren’t there like they were supposed to be. It was a vibe that wasn’t so conducive for getting an autograph.

A black SUV with tinted windows pulled up, and the manager ran over to it. All of the sudden, two huge security guards appeared from inside the venue, standing outside by the door. As he got out of the car, I held up his book cover and asked if he could sign it. He stopped and thought about it for a few seconds, before saying, “No, but I will after the show.”

As my wife and I were walking down the street, something happened that I’ve never experienced in all my years of collecting autographs. I heard a voice say, “Hey, hey!!!”

I turned around to look, and JB Smoove had his head out the door, and he was flagging me back over. I sprinted to the door, hoping to get there before he changed his mind, or got swarmed by other fans walking up to get their tickets.

He took the book cover, and thanked me for buying it. My wife said, “I actually got it. I bought it for him for his birthday because he always talks about you.”

He smiled, and put it up against the wall to sign it. I said, “Can you make it out to JB, because...my initials are JB, too.”

He chuckled and wrote “2 JB” and wrote one of his catch-phrase words “ruckus” and signed and dated it. He put a smiley face by his signature, which reminded me of how Chuck Berry signed a guitar for me once.

He thanked me again for bringing the book, and as my wife mentioned her getting it, his manager looked at her and said, “We know you bought the book. You’ve said that twice now!”

And as we walked to the show, my wife was furious. She said, “How rude of that guy! Why did he have to say that.”

I said, “I told you he was mean.” I then explained that I’ve seen a lot ruder behavior when it comes to autographs. She obviously hadn’t. I laughed the angrier she was getting. I said, “I’d rather have them be rude to me and sign the autograph, then be polite and not sign.”

She added, “Why did he have to say anything? He should just shut up. We don’t care what he has to say. We want to interact with JB.” 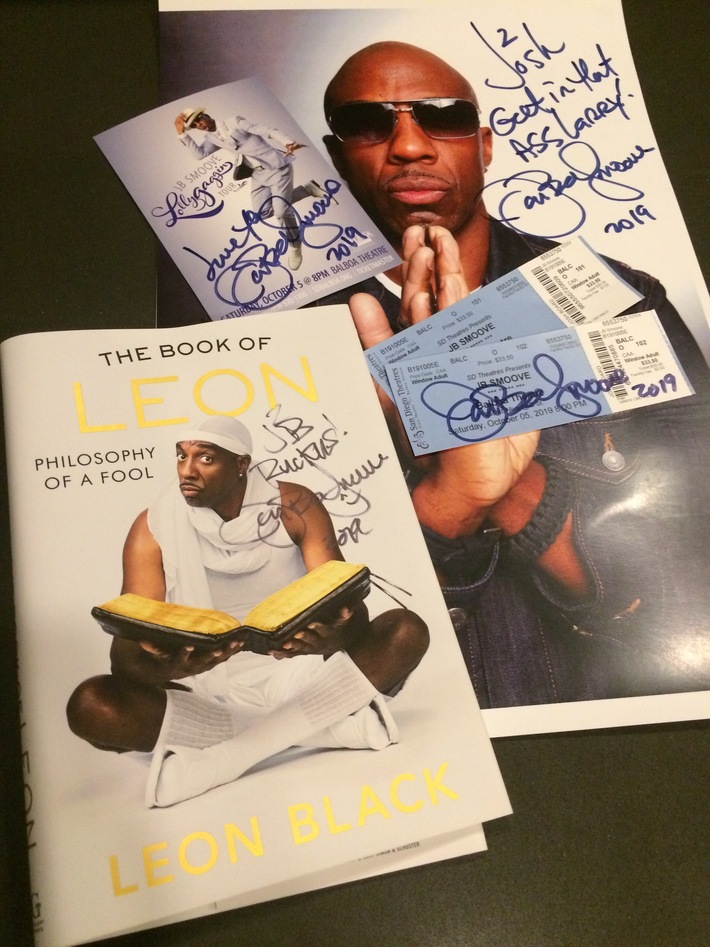 We walked up to our seats and enjoyed a fun show. JB said afterwards to the crowd, “I’ll be in the lobby giving hugs after the show.”

As we walked down the stairs, there was JB Smoove, standing behind a table signing autographs and taking photos. They were selling great picture/posters that were a lot bigger than 8x10 and on good paper stock. Those were $10 and I figured...since I’m going to ask him to sign the ticket stub as well, I should buy a picture.

My wife got something signed and...since his tour was called “The Lollygagging Tour” (he does a great bit in his show about adults being kidnapped because they’re not paying attention and merely “lollygagging”). She said to him, “I haven’t heard the word ‘lollygagging’ since my aunt Edna said it when I was a kid.”

He laughed and gave her a big hug.

The wife asked me if I wanted a photo. Even though I was wearing a shirt that said “The JBs” (it’s a James Brown shirt, not a JB Smoove one), I said no. I had gotten my selfie the other day, and I figured it would help the huge line move quicker.

He signed the photo and ticket for me, and I said, “It’s my birthday today (which it was), and this made it a very special evening”

He looked up and said, “Oh man, thank you so much.”

Since he did a bit in his show where he makes a funny sound while grabbing his wife’s chest, I said “How annoying is it when people make that sound when they take a picture with you?”

He smiled and said, “I always love it. I never get annoyed by it. They’re showing me the love.”

I thanked him and as I was walking away he said, “And thanks for the love with the book, too.”

I was shocked. I didn’t think he would’ve remembered me from earlier in the day, with this many people hounding him for autographs and photos.

As we were walking back to the car, someone saw all the stuff in my hand and asked, “Who is that?”

I said, “It’s JB Smoove. He was in town doing a show tonight.”

The person asked, “Was it good?”

I smiled and replied, “It was as good as that sweet brown bread they give you at the Cheesecake Factory.”

Very cool story. Glad to hear that he is a good signer.

When he first told me he would sign after the show, he should've said, "I always sign inside after the show." I remember the first time I met Buddy Guy before a show, and he didn't sign. I was at the concert, and he signed for everyone during the last song. You could just walk up and have him sign stuff, and Buddy's merch booth had reasonably priced pictures and posters signed, for sale. If the artist tells you that, that works.

I love that dude.

Comedians are super hit & miss when it comes to autographs with most usually bolting immediately after the show. Still that’s cool JB is super friendly and does that after shows.

Exactly, John. And the fact that the photos are reasonably priced. Buddy Guy had the same thing. Signed posters and pictures that weren't expensive.